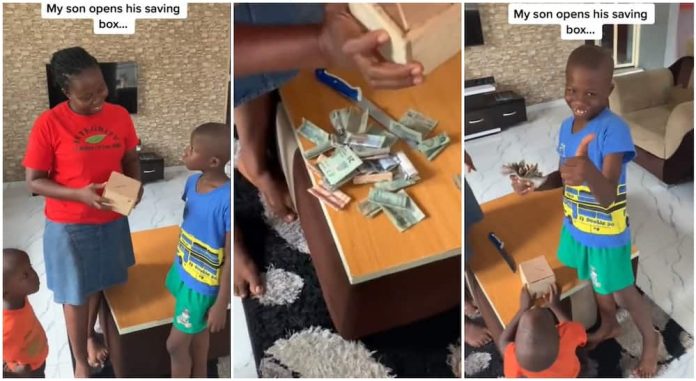 A little boy has impressed many people online after he broke his piggy bank and counted the cash in it.

The TikTok video capturing the moment was posted on Saturday November 19 by Jenny Golden, the boy’s mum.

TikTokers have praised the boy for imbibing the spirit of saving at such a young age and they asked him to keep it up.

In the short clip lasting just about 3 minutes 43 seconds, the woman narrated that the boy personally asked for the small box some months ago.

According to her, the boy started saving ‘small small’ amounts giving to him in the box.

Jenny said it became neccesary to break the box because of the planned redesign of the Naira by the Central Bank of Nigeria.

After counting the money in the box, it was evident that the boy has been able to save the sum of N3800. The Naira denominations ranged from N10 to N1,000 notes. Many TikTokers have been impressed by the boy’s wisdom.

READ ALSO:ABU, UK varsity to research on out-of-school children in Nigeria, 2 others

Reactions from TikTok users @Gifto Currency said: “My mother will never give me back that money. She will tell me she will buy what I want buhh sorry I will never see the money.” @Ms.Dorine said:

Not me running to show my mom this video. My mom go tell you make you give her the money to save by herself. At the end no money she go give you.” @pretty quin marian commented: “An Igbo man who is already a millionaire at this tender age please keep encouraging him oo for future reference”.

@user3480654445658 said: “This boy is brilliant and very smart and wisdom and I believe in the future he will become a millionaire.”

Meanwhile, it was reported that a Nigerian man broke his piggy bank and showed off the sum of N5.5 million. In a video he posted on TikTOk, the man was seen counting his money and arranging them in stacks of N500,000. His ability to be patient and save such amount attracted praises from TikTokers.