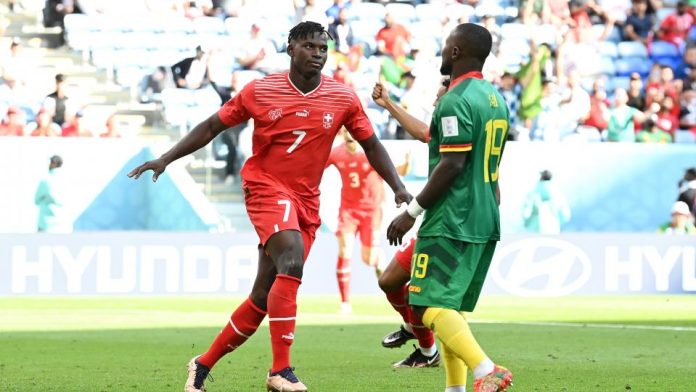 Switzerland have on Thursday managed to grind out a 1-0 victory vs a disciplined Cameroon side in their first game of the 2022 World Cup held in Qatar.

The first major attack of the Group G matchup was engineered through a Breel Embolo penetration into the box. Although it looked like the Cameroon-born Swiss international looked to have been bundled over in the box, the play was stopped for an offside.

Soon after, Cameroon’s turn for a big chance surfaced as Bayern Munich’s Choupo-Moting was played through on goal. However, defender Manuel Akanji just did enough with a physical challenge in the box.

Akanji then had a great opportunity on the other end to break the deadlock but sent a glancing header just wide of the goal upright after a perfectly-delivered corner.

Cameroon had managed to string together a plethora of chances in the first half that they would surely be remembering regretfully, as Switzerland got their goal just two minutes after the break.

Remo Freuler had played a cross across the box for Breel Embolo, who took no time in firing home the European club’s solitary goal. The 25-year-old notably opted against celebrating his strike, as he was born in Yaoundé, the capital of Cameroon.

Embolo was about to get his second as he got ready to strike the ball from a corner, however, Cameroon midfielder André-Frank Zambo Anguissa made a superb last-ditch clearance to deny him.

Switzerland then managed to hold on for a highly-coveted opening victory, stifling any further attempts from Cameroon.

Cameroon will next face Serbia on November 28, while Switzerland will hope to put in an exemplary performance to counter Brazil later that Monday.