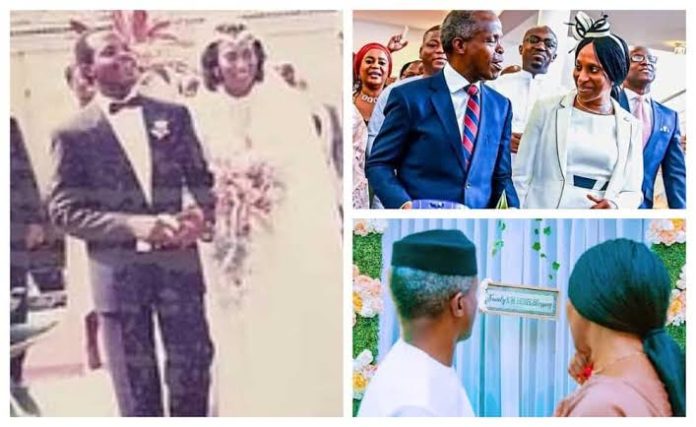 Vice President Yemi Osinbajo and his wife, Dolapo Osinbajo, are celebrating their 33rd wedding anniversary Mrs Osinbajo revealed this in a post on her Instagram page on Friday, November 25, with a lovely caption to go with it She shared a photo from their wedding day and another image which seems to be indicating that the couple renewed their vows .

The Vice President of Nigeria, Professor Yemi Osinbajo and his wife Dolapo Osinbajo on Friday, November 25 marked their 33rd year wedding anniversary. Mrs Dolapo made this known via an Instagram post sighted by Legit.ng on her verified Instagram page with the caption: “You said, “Walk with me, I said, “I will, 33 years ago.”

Dolapo, the grandchild of legendary nationalist and pioneer of Nigeria’s independence, Chief Obafemi Awolowo, married Osinbajo in 1989. The union has produced three children, Damilola, Kanyinsola, and Fiyinfoluwa Osinbajo, who happens to be their only son .

Joke Sylva, Ibunkun Awosika, others celebrates couple Meanwhile some Nigerians took to the comment session of Dolapo’s handle to celebrate and pray for the couple. Ibunkun Awosika, a foremost motivational speaker and businesswoman, lauded the couple and prayed for them.

She said: “Happy anniversary to a most beautiful God fearing and amazing couple. May the Lord surprise you daily as you walk into the many years ahead!” Veteran Nollywood thespian Joke Silva also congratulated the couple, saying: “How beautiful….Happy wedding anniversary to a gorgeous couple” @jayoluks said: “Congratulations, Sir and Ma @dolapoosinbajo May the LORD continue to preserve your home as a testimonial of His steadfastness and faithfulness.”

@graahum said: “Happy Wedding Annivrrsary sir!ma. You will both live to witness many more sweet years together in Jesus name. Amen. Congratulations my beautiful first couple. You are an example to us all. I love uuuuu”