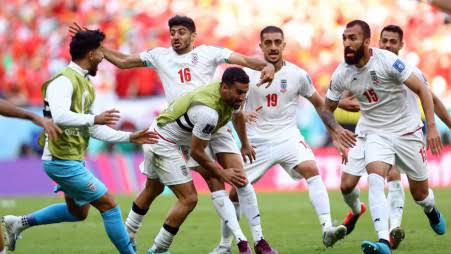 After having a goal disallowed by offsides in the first half and having two shots hit the post in quick succession in the second, Iran looked to be out of luck against Wales on Friday.

However, with hope refreshed after Welsh goalkeeper Wayne Hennessey was sent off late in the match for a rough challenge, Iran finally broke through on Rouzbeh Cheshmi’s laser strike in the 98th minute and added insurance with Ramin Rezaeian’s goal three minutes later.

The result: A rather astounding 2-0 win for Iran that could very well change the fate of Group B.

Iran’s Alireza Jahanbakhsh draws a yellow card for Iran after his foot finds the face of Chris Mepham.

Wales’s 10 players will have to fend off nine minutes of stoppage time.

A review finds that Wales goalie Wayne Hennessey’s tackle of Mehdi Taremi deserves a red card and he’s sent off. Wales will finish with 10 men. Danny Ward replaces Hennesseey in goal, and Aaron Ramsey is the Wales player who is removed from the game on the goalkeeper’s red card.

A red card is given to Wayne Hennessey after this challenge 🟥

A red card is given to Wayne Hennessey after this challenge 🟥 pic.twitter.com/frfbiOt0we

Ben Davies is set up nicely at the top of the box, but Hossein Hosseini gets a fingertip on the ball and it sails past. Iran then breaks out on the counter, and Wales goalkeeper Wayne Hennessey comes far out to chop down Mehdi Taremi. Hennessey gets a yellow card, but VAR turns it into red.

Ali Karimi is Iran’s final substitution of the game, replacing Saeed Ezatolahi in the 83rd minute.

Saeed Ezatolahi gets another strong Iranian chance but a diving Wayne Hennessey pokes it just wide of the net. The momentum clearly rests with Iran — which has never beaten a European nation in the World Cup — as Wales looks out of sorts.

Though Wales is increasingly on the front foot, Iran’s counterattacks look more and more dangerous. It just can’t seem to put the final pieces together. In the 71st minute, Iran gets a solid chance but Wayne Hennessey cleans it up in goal.

Iran makes a change, with Karim Ansarifard taking the place of striker Sardar Azmoun, who has taken a true beating today but gave a noble effort.

With Iran starting to press the issue, Wales is the first to make changes, with Brennan Johnson and Daniel James coming on to replace Connor Roberts and Harry Wilson in the 57th minute.