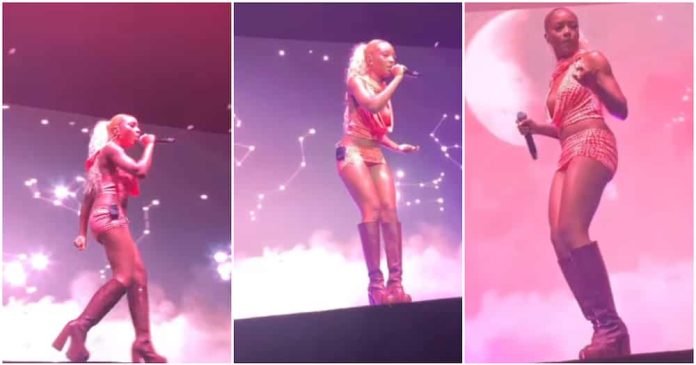 Popular Nigerian singer, Ayra Starr, has once again made the news over her fashion choices after a recent show The music star was one of the guests to perform at the Meta concert and her outfit on stage raised a series of mixed reactions Ayra rocked a very tiny skirt, a small top and her signature high boots as fans captured her outfit on video and posted online .

Talented Nigerian singer, Ayra Starr, has been known to make the news over her outfits to public events and this time was not any different. The Mavin star was one of the celebrities who performed at the recently held Meta concert and her attire seemed to get people talking more than her singing did.

On November 24, 2022, a series of videos of Ayra at the event made the rounds after she rocked a tiny skirt and a skimpy top paired with her signature knee-high boots .

Ayra is no stranger to wearing small clothes but this particular outfit seemed to catch the attention of more people as she moved around on stage during her performance.

The singer also seemed to pair the outfit with matching underwear as it became glaring at a point during her performance.

Nigerians react to Ayra Starr’s tiny outfit at Meta concert Not long after the video of Ayra’s performance made the rounds on social media, a number of netizens had a lot to say about what she wore.

Read some of their comments below: that_girl__tam: “This cloth no even reach half yard” proximaofficial1: “See small yansh dey shake ooo” joan_nams: “This skirt be like handkerchief o ” soma__chi: “She suppose Dey wear cloth” blackmonalisaa: “Celestial being nor need to wear clothes.

robyekpo: “Arya just wear napkin ” u.b.a.n.i: “Omo this clothes na her younger sister own. Nothing you fit tell me” .

Ayra Starr claps back at critics of her tiny clothes Talented Nigerian singer, Ayra Starr, has finally responded to whining on social media about her mode of dressing. The 20-year-old MAVIN crooner has been known to dress freely while rocking revealing outfits and it sparked complaints from some netizens. In reaction to her detractors, the Bloody Samaritan crooner posted a video of herself singing one of her songs that appeared to have an apt response.
https://www.legit.ng/entertainment/celebrities/1506044-wear-napkin-singer-ayra-starr-rocks-tiny-outfit-stage-online-stir-video-viral/